Under the Sea: The Georgia Aquarium

This is a story all about how a television sitcom called The Fresh Prince of Bel-Air did it for the culture. There are certain things that are the hallmark of my childhood – Black sitcoms are one of them. I count myself privileged to have grown up in the 90s and early 2000s when we saw a renaissance of sitcoms on network television that featured Black ensemble casts. The highlight of the evenings in my family was tuning in to shows like Family Matters, Martin, and Living Single. These shows not only had people that looked like me and my family but represented the aspirations and ideals of our community. These shows showcased Black love, strong families, and professionals doing well for themselves,

Debuting in 1990, Fresh Prince was among the first of these shows in this era. This show took us on a six-year journey, watching a young man from working-class Philadelphia come of age in upscale Bel-Air. We watched a family grow closer. And we were part of that family. The Fresh Prince was all style AND all substance, and it deserves more flowers than I ever realized.

The Fresh Prince of Bel-Air Reunion was a rollercoaster of emotions and nostalgia. We relived so many iconic contributions to pop culture:

…and too many more to name. From routinely breaking the fourth wall to setting fashion trends, The Fresh Prince was ahead of the curve. We were invited into the living room of the Banks’ and Smith family every Monday night and we became a family that would last for generations to come.

The minute I tuned in, the set transported me back to a happier time. The downstairs set of the Banks estate had been rebuilt and the familiarity settled in. We were invited into that living room one more time.

My heart could not help but be full when the cast began to trickle in one by one. First of all, EVERYONE looked phenomenal, like life had treated them kindly. Thirty years later, the cast has aged appropriately, but not like dairy that’s been outside too long. (Praise the Lord, somebody.)

But the atmosphere of genuine love emanated through the screen like warm chocolate on a cool winter day. It was immediately apparent that this was not a group of coworkers getting back together for a company picnic. This was a family reunion. It reminded me of when everyone gets together the day before you bury a loved one. You start to see cousins you haven’t seen in years trickle into the house, and it’s like you never left. The occasion is dignified, but there is still joy to be found in one another.

One of the most fascinating aspects of the casting of The Fresh Prince is that the cast was a melting pot of veteran and experienced actors anchored by a celebrity with no experience. Will Smith, who had never acted before, was pitched the show by Benny Medina, vouched for by Quincy Jones, and mentored and strengthened by his castmates.

The cast shared wonderful anecdotes about Will’s “ventriloquist” tendencies during the first season (mouthing other actors’ lines on camera), or how Tatyana Ali’s first kiss was during a scene, with her TV siblings watching with bated breath in the background. I got a sense that the cast was genuinely rooting for one another to succeed. Now, as we all know, Will Smith is an Oscar and Golden Globe-nominated actor. It just goes to show that if God opens a door for you He will surround you with the resources and people to help you walk through it and grow into the next place.

Representation Behind the Scenes Matters, Too

Seeing the image of a Black family, helmed by a successful judge and professor, with somewhat well-adjusted kids was an inspiration. Hearing about the cast’s influence behind the scenes was insightful. The Fresh Prince of Bel-Air is loosely based on record mogul Benny Medina’s transition from Watts to living with a white family in Beverly Hills. In his foresight, he pitched the idea of the main character living with his Black family to give the series room to explore a more complex array of dynamics. This set the stage for the series contributing so much more than good TV.

In the six years The Fresh Prince aired, the show managed to tackle topics like racial profiling, prejudice, bullying, and much more. What impressed me the most is how the show used its unique premise to tackle prevailingly Black issues. For example, a continuous undercurrent in the show is the class dynamic between Will and the Banks’. Sure, their adjustment to each other was played for laughs, but the show did not shy away from dealing with how we define Blackness, or how we treat one another when we begin to ascend the socioeconomic ladder.

More impressive is the authenticity with which these subjects were handled. The cast recalled how they were given the latitude to call out unrealistic dialogue and scenarios with the writers. The show was also very funny, but always stopped short of resorting to buffoonery or caricature to get its point across. This ensemble of Black creatives seemingly had their creative freedom and representation honored in a way that was not common for the time, and in retrospect, it shows.

The Seed Lives On Beyond the Sower

There was a huge empty space on the recreated set the size of one James Avery. The room was full with joy and love, but our Uncle Phil was missing and sorely missed. The segment in tribute to James Avery was by far my favorite. It was so incredibly moving to watch the cast reflect so deeply and fondly on him as a friend, mentor, teacher, and father figure. As the cast traded stories, his legacy came to life and sobriety turned to celebration.

One such story was concerning one of the most iconic moments in television – “How come he don’t want me, man?” This is the moment that helped solidify Will Smith’s prospects for the dramatic roles for which he is acclaimed today. It was James Avery that coached Will through this scene and helped sharpen many other cast mate’s chops.

You Can Always Come Back Home

Arguably the most anticipated moment of the reunion was the return of Aunt Viv – the first one. Janet Hubert’s exit from the Fresh Prince after season 3 was certainly not without controversy – 27 years worth.

A veteran stage actor and triple-threat, Janet Hubert had a promising career on the horizon after being endeared to audiences as our favorite educated, sophisticated, nononsense auntie. After a highly publicized falling out with Will Smith, amongst other parties, Janet Hubert’s career suffered gravely. There had been so much speculation about her departure from The Fresh Prince and her internet rants last year stoked that fire.

Janet and Will finally had their come to Jesus meeting and seem to let bygones be bygones. In telling her side of the story, Janet shared how her personal struggles impacted her work, and how she felt like she had been blackballed by Will in particular. One thing that stood out to me about that was a mysterious “they” she mentioned that had given her that sense. I’m not sure if there was a third party fanning the flames, but it is rarely wise to trust a third-party when you have access to the source.

Life and Death Are In the Power of the Tongue

Janet also raised the point that labeling a Black woman “difficult” – especially a dark-skinned black woman – is the kiss of death. I appreciated that they did not shy away discussing how the stereotype of the “Angry Black Woman” is dangerous when perpetuated, especially by Black men. Influence does not have to be accompanied by power to be powerful. We must be aware that our words truly contain life and death.

Will accepted the responsibility for what his youth and inexperience had caused, and Janet apologized as well. There are many internet pundits that have mixed opinions, but we may never know the totality of what was discussed. All that matters is that they are good, and we love to see it.

The other castmates received Janet with open arms as if she never left. True family may fall out every now again, but for the most part, reconciles for the common good.

All in all, this reunion special gave me so much more that what I expected. I expected to walk down memory lane, laugh a bit, and smile, but I got all the feels instead. If you are surviving 2020, you deserve this morsel of happiness in your life. I’d say it’s a must watch.

Tatyana Ali summed up the show and the reunion best:

The excellence was the way that we loved each other.

I can only hope that is what we all take away when this year is over. What a legacy to leave us. 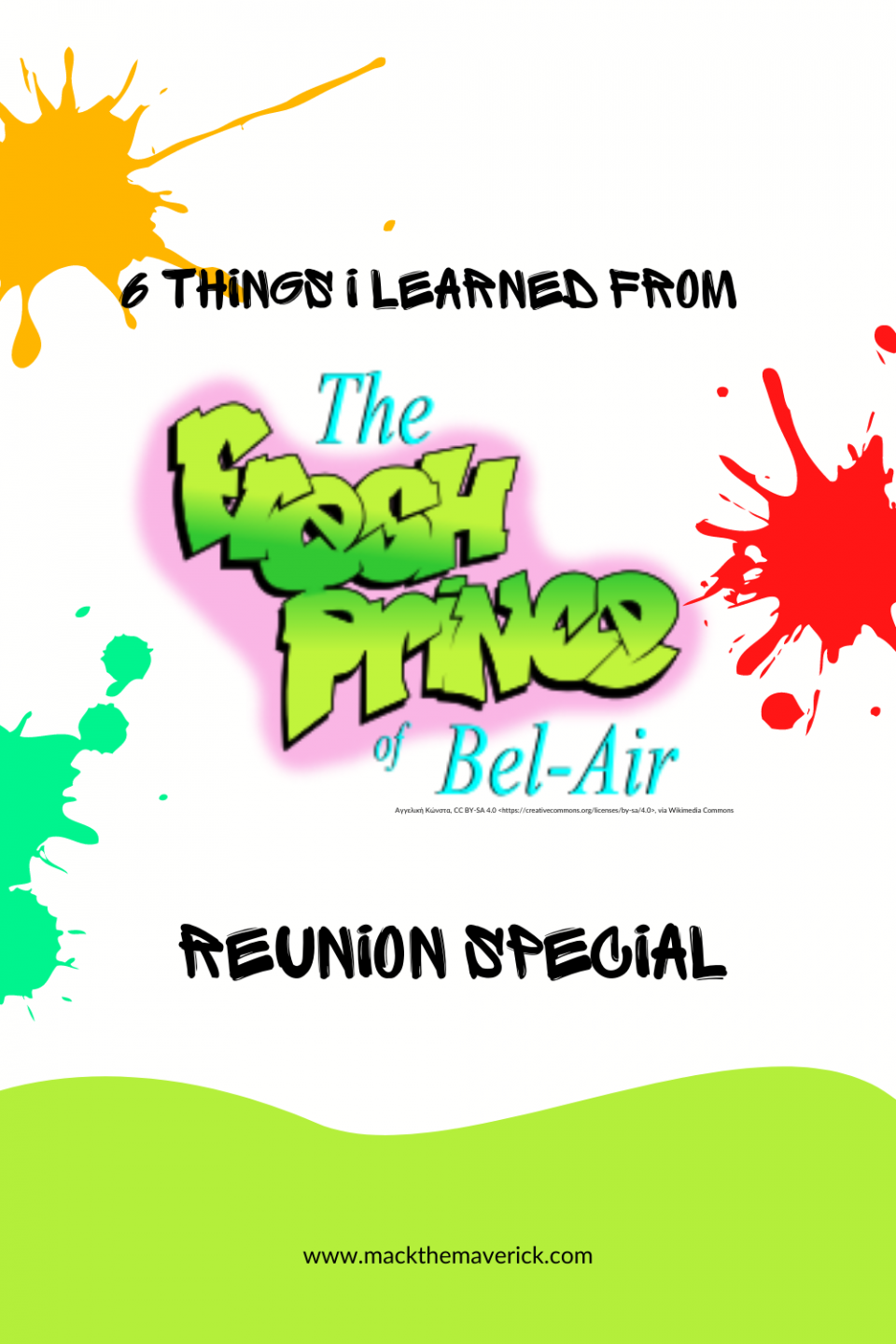 Don’t take my word for it, though – catch the Fresh Prince of Bel-Air reunion special now on HBO Max and let me know what YOU learned below!

Subscribe now to get the latest updates and inspiration from Mack the Maverick delivered straight to your inbox!

This website uses cookies to improve your experience while you navigate through the website. Out of these cookies, the cookies that are categorized as necessary are stored on your browser as they are essential for the working of basic functionalities of the website. We also use third-party cookies that help us analyze and understand how you use this website. These cookies will be stored in your browser only with your consent. You also have the option to opt-out of these cookies. But opting out of some of these cookies may have an effect on your browsing experience.
Necessary Always Enabled
Necessary cookies are absolutely essential for the website to function properly. This category only includes cookies that ensures basic functionalities and security features of the website. These cookies do not store any personal information.
Non-necessary
Any cookies that may not be particularly necessary for the website to function and is used specifically to collect user personal data via analytics, ads, other embedded contents are termed as non-necessary cookies. It is mandatory to procure user consent prior to running these cookies on your website.
SAVE & ACCEPT
Loading Comments...
PRESS ESC TO CLOSE